And now, my final theory on the origin of mass murderers — peer pressure! If everyone else killed people, would you do it too? I sure hope not, but it’s a good theory! I feel like this could be a 90’s style PSA about bullying. Also, the Balloon Man reappears since this is technically a flashback! 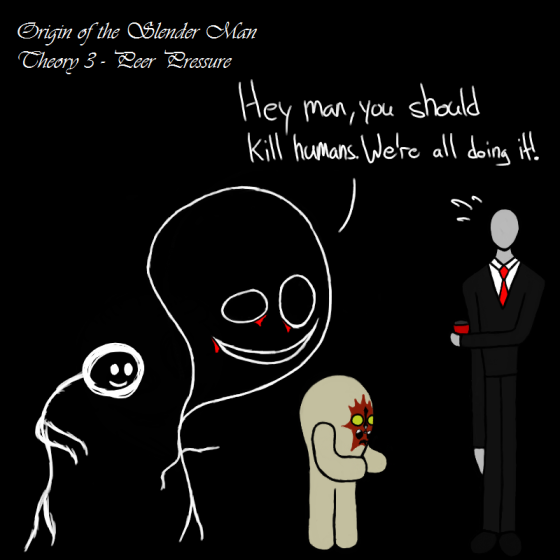 What would happen if you put Slender Man, Pirate, SCP-173, Knight, and Rabbit in a bar? This, I guess. Upon reflection, it’s surprisingly normal. 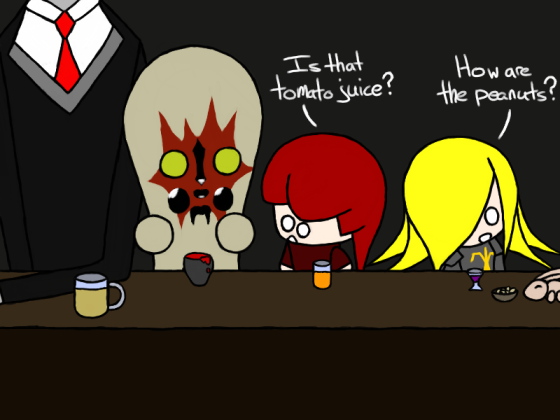 Don’t ask for a taste, Pirate.

I know weight is a sensitive issue, but I feel that we have to make a distinction between those who are too heavy and those who aren’t. For instance: balloons. If you’re too fat, you can’t fly. Fact of life, that.

They could stand to lose a few pounds.

Soup. Every culture in the world knows how to make soup. (I think.) You just add water and food and stir it in a pot over a fire. That’s the basics of soup. It can taste good or bad, but it’s still soup. This picture was drawn when I was really hungry, alright?

Everybody wants soup. I’m so hungry.

Halloween! It’s time to get candy and play pranks, but make sure you don’t go trick-or-treating in the wrong places! Knight and Pirate aren’t very lucky when it comes to getting treats. I guess Slender Man’s idea of candy differs from ours. 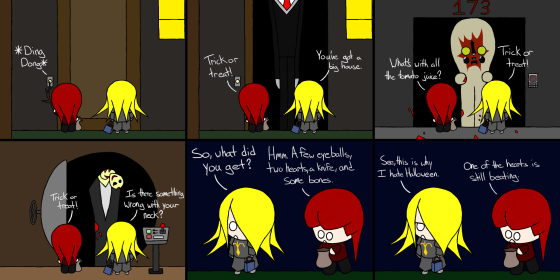 Why are Slender Man, Pirate, SCP-173, Rabbit, and Knight playing soccer? We may never know. But more importantly, Rabbit had better move or else this could get ugly!

A stranger game of soccer we may never find.

*Not really. In truth, I think the anniversary of Pirate Blog was a few months ago. But today marks the 357th Post of Pirate Blog! So that’s sort-of close-to an birthday for the blog!

It’s been a long time, and the artwork has certainly changed. Every day for an entire year, Pirate’s been appearing in your inbox or on this site. Every day, without fail unless I forget to upload the picture. Sorry about that.

But more seriously, it’s time to tell you all something. In truth, this blog isn’t really a fair representation of Pirate. In point of fact, even after all this time we still don’t know much about where she came from, what she does, or even where she lives. There are hints, but the true story of Pirate has not been told. Yet.

So that’s why I’m going to announce that this blog will continue, but instead of a blog, think of it more like a webcomic. Some days will be funny stand-alone pictures, but other days will have a story about Pirate, an adventure, a secret, a monster. You can do the weird WordPress subscription-thing and get an email with Pirate in it every day, or you can check the blog, but I plan on releasing a picture a day for the foreseeable future.

Therefore: tell your friends, share this on Tumblr, Facebook or whatever crazy social media site you want, but let people know that there’s a strange, red-haired girl wandering around the internet. Her name is Pirate.

Here’s to one year:

It’s been a long year. Let’s let her sleep.

It’s out. SCP Containment Breach 1.0 has been released. And…I’m not playing it. Far too scary. Words can’t contain how much nope this game has. But if you like being scared, click on this link. I’m going to join Pirate in hiding in the closet now. 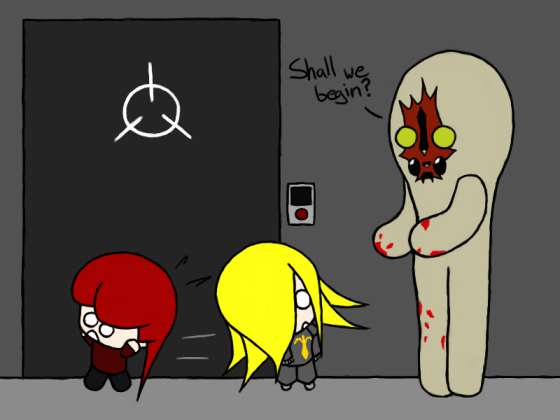 Here’s a cast picture of all the characters that regularly appear on Pirate Blog! Also: a phrase, poem, or even haiku about them! 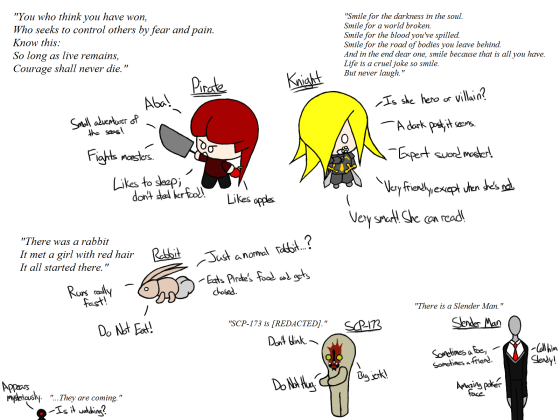 It’s only the beginning!

Mirrors are often called windows of the soul. For Pirate, it’s a darker reflection. I’ve flipped the image so you can see both perspectives, and yes, she is looking into a lake. All the monsters get in the way of the water, though.

With a few exceptions, this represents Pirate’s current gallery of enemies — although some can be friendlier at times. But one of these things hasn’t shown up in any comic yet! Which one is it? (You only get one guess.)

…What’s it like to look from the other side?