It’s been a long time.

Actually, it’s been only a few months. Less. But it feels like a year or two. And sadly, I’m not writing here to say that I’m back. Rather, it’s to let you all know what I’m doing.

I’m writing a Web Novel. You may also think of it as a web serial, or a novella written in small, 1,000-4,000 word doses that I post every Tuesday and Saturday. The genre is Fantasy and the name of the story is The Wandering Inn.

I won’t do much advertising here. I’ll just leave a link and a picture that has nothing to do with the actual plot of the story. This is just a picture with Pirate and her friends having a party for old time’s sake.

But if you’re interested in seeing what I have to write, check it out sometime. Right now I’m only 4 installments in, but hopefully I’ll keep adding to the story for a long while.

…I mean, I’ve written two novels now. How hard can it be to write another? Writing is weird.

Hope you’re all well. Stay out of weird inns.

A thousand days of Pirate. And her journey has only begun…

It’s been a long time. A very long time. 1000 days, in fact. And each and every day I drew a picture of Pirate.

True, I forgot to post some days, and other times I feel like the humor wasn’t there or the drawing didn’t capture my ideas fully. But when I first started this blog nearly three years ago, I intended to do just this. At the time, I had no idea how to draw. I’d just bought a Wacom Tablet, and I wanted to improve my art skills and draw this cute character called Pirate. And so I did.

My first pictures are still on here. Well, not my first few pictures. I think I threw those away. But I decided that no matter how awful I was, I’d draw a picture of Pirate doing something every day as a way of improving my art. And I did. And somewhere along the way people started watching.

I never really promoted this blog. I’m no good at social stuff, and I really didn’t have the confidence at the time to say I had anything worth sharing. But slowly a few people began watching this blog. And I am grateful to you all for it.

But with that all said, it’s time to say goodbye. I know it’s sudden and I only hinted at it during my 900th post, but I’ve made my decision. And it’s been hard to do.

If I could I would draw Pirate forever. Some days its hard to figure out what to draw or be creative, but I truly believe I could come up with a new picture every day for the rest of my life. If I had the time. If I could make it work. But I can’t.

I’ll be honest, part of it is money. Part of it is time. These are petty things, but I’m growing older and they weigh more on me each passing day. When I first started this blog I was in college, and had time on my side. But now I’m graduated and working. And though I can still work and draw, it’s harder. And harder still is finding the time to do other things.

You may not know this if you only come to the blog to look at the pictures, but I wrote a book. All things considered it wasn’t a great book since I failed to market it well. I self-published it and failed to do any of the things that would help me sell it. It was a lesson, and one that I learned a lot from. But I found in writing that book something I loved to do.

I want to write. I want to draw. I even want to make video games. But I don’t have time for any of it, and this blog means I spend hours each day making a new picture. So, as much as it hurts I need to stop. I wish it weren’t so, but I can’t be the same forever.

It feels like so much has happened in the world since I started drawing. In the time since I began, we lost many people. Celebrities, family…I’ve drawn through the loss of people I loved to the start of wars. It feels sometimes like the world has become a darker place. But this blog was always meant to be a place to lose yourself for a few seconds each day.

Yet I can’t keep creating it. It’s not that I feel like it’s worthless; on the contrary, that’s the problem. Every day, no matter what I did, no matter how low I felt…so long as I had this blog, I could feel good about what I had done. But that is what is holding me back. So long as I have this small blog, I could devote my time to it and not creating something larger. So I have to stop. But the memories remain.

Let me write this down so I may make a record of it. In the time since I started Pirate Blog, I have had just over 10,000 total views on this site. Over 4,000 people have visited this blog, and 173 people follow this blog. It’s truly been fun.

If I could, I would draw here forever. If I could. But I can’t. Pirate’s story was never meant to be the comedic, random story it is here. Her true story, the one I know and have never told is far larger than this blog can contain. So she must set out on that journey, just as I have to change.

But is Pirate gone? Am I leaving here forever? No. Pirate, Knight, Rabbit, the Stick People…they won’t simply disappear. Each one has their own story I hope to tell, and they will remain here as well. Some day I will come back, and I hope to create more stories about Pirate in the future. But for now, Pirate Blog is on infinite hiatus.

I’m sorry to write in such a clumsy fashion. But there’s no magic in my words right now. Just a bit of sadness. I thank you all who read this, every single person who’s ever commented and liked my posts, or simply clicked on these silly pictures and enjoyed seeing a girl named Pirate.

Someday I will return. But for now, at the end of a thousand days, Pirate Blog is over. Thank you for reading. Until we meet again, 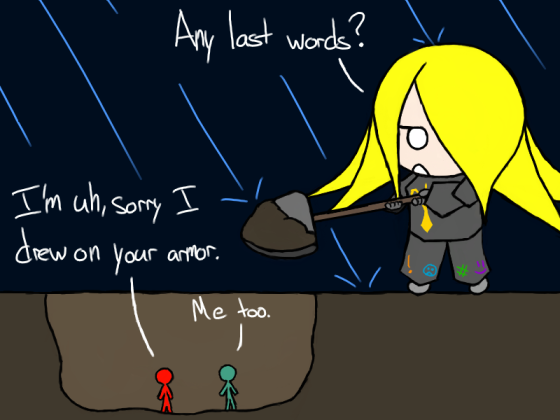 From poetry and nice visuals to cold-blooded murder over graffiti. Yep, that pretty much sums up that blog. For the record, I don’t hate graffiti. It’s a really cool art form. I just hate graffiti on my stuff. 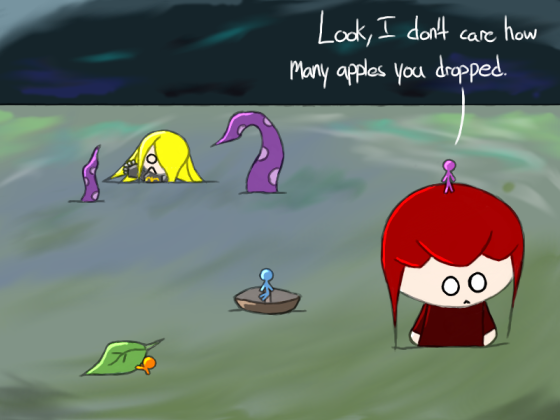 Some things aren’t worth the effort, Pirate.

This new drawing style is taking longer than I’d like. And water is still really hard to draw. I might go back to my old methods in a while, but for now let me just say that I hate swamps. Anything could be lurking in those dark waters, and I for one don’t want to find out what’s down there.

This was…surprisingly hard to draw, even without having to worry about details as much. Looks like you can’t take shortcuts on the road to art, especially since I still can’t draw any kind of special effects.

Look at that blue blog that’s supposed to be a shock-wave thingy. It hurts. But improve and keep practicing! I do like the MS Paint-eqsue feel of this kind of drawing, though. 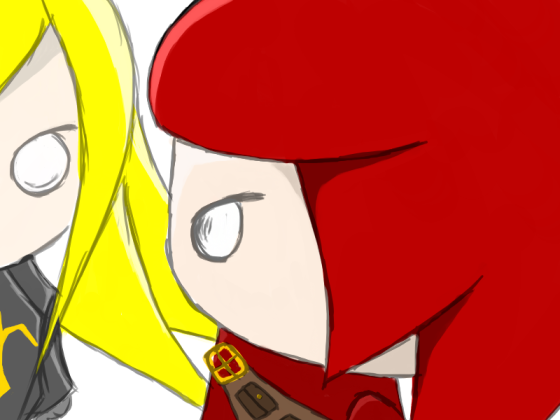 It’s all just a bit unclear.

New art styles are hard to figure out. This is just a quick sketch of me trying out a new way to draw. It’s got promise, but I always find time is hard to balance against drawing a new picture every day. Hm. Well, that thing on Pirate’s chest is a bandolier, by the way.

Today’s picture is somewhat different. This is a quote from the Dao de Jing, a famous text about the way of the Dao, or Tao. It’s considered the underlying principle of the universe, and following it is said to bring prosperity and success. And yet, without laughter it’s not the Dao. I just like that idea.

Ever played those games in the water where you balance on someone else’s shoulders and try to knock everyone into the water? I miss that. You can’t play those games by yourself, and especially if you don’t have an ocean, or at least a pool nearby.

Anyways, Knight’s strong. She can easily lift Pirate and as many stick people as she needs. Doesn’t mean she’s going to be happy about it, though.

The cannon fire is a nice backdrop to the conversation.

Sometimes you just have to work around annoying distractions. For instance, if I’m hiking I ignore the mosquitoes and bugs as best I can. In the same way, I guess you’ve just got to put up with stick-people when they decide to use your head a battleground.